Before we get started

What follows may be considered "Texas-style" (specifcally, East Texas As opposed to other geographical styles of Texas: Central, West, South. ; as only salt & pepper used). Also, a Big Green Egg In this case a Large BGE is used. 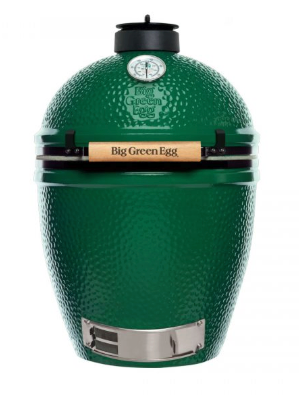 is used to smoke this along with a Flame Boss Actually, I use a BEG-branded EGG Genius, but I'm not sure of any difference with the manufacturer's version

Start with a pork shoulder (or, as you probably know it, a Boston Butt Boston Butt, or pork butt, comes from the shoulder of a pig. The name "butt" comes from the barrel this less prized piece of meat used to be stored and transported in back in pre-revolutionary New England - Ref: Wikipedia ).

Now, some folks like to start with a mustard base to help the rub adhere. I can't honestly say this makes a difference so I will omit in favor of Less-is-More™️.

Trimming: Now trimming fat on a pork shoulder is less common than with, say, a brisket. But if you have a sharp knife handy, proceed as necessary. The idea here is that you don't want any fat globs to not render down  and either provide a bad bite or prevent a great bark-on-meat formation for your money shot. You certainly want some fat (1/4" perhaps) to protect the meat form the heat and render down to juicy goodness. With all that being said, you shouldn't need to do too much to a pork shoulder.

That's it folks. Just good ole Salt-n-Pepa I don't particularly like handling raw meat all over my kitchen so I choose to temporarily monopolize the kitchen sink. A simple, plastic cutting board barely fits in the sink (it actually doesn't sit plumb but gets stuck an inch from the bottom of the sink, which I kind of like so water can still pass through to the drain).

Speaking of raw meat, I use disposable gloves when seasoning so I can easily take a glove off to open a door or otherwise handle a clean surface/object.

A dredge shaker will come in handy to mix and distribute the ruby onto the meat. Cover the surface of the meat but don't leave globs that will make for bad bites post cook. Also, be careful when seasoning pockets that won't  be directly exposed to heat (I'd recommend going light in these areas so you don't end up with bad bites)

*In the post-rub picture above, I'm using a roasting rack which I actually wouldn't recommend (it's a pain to clean after the cook). Instead,just leave on the cutting board or put in a pyrex to move around/store in fridge until you need to place this directly on the grill. 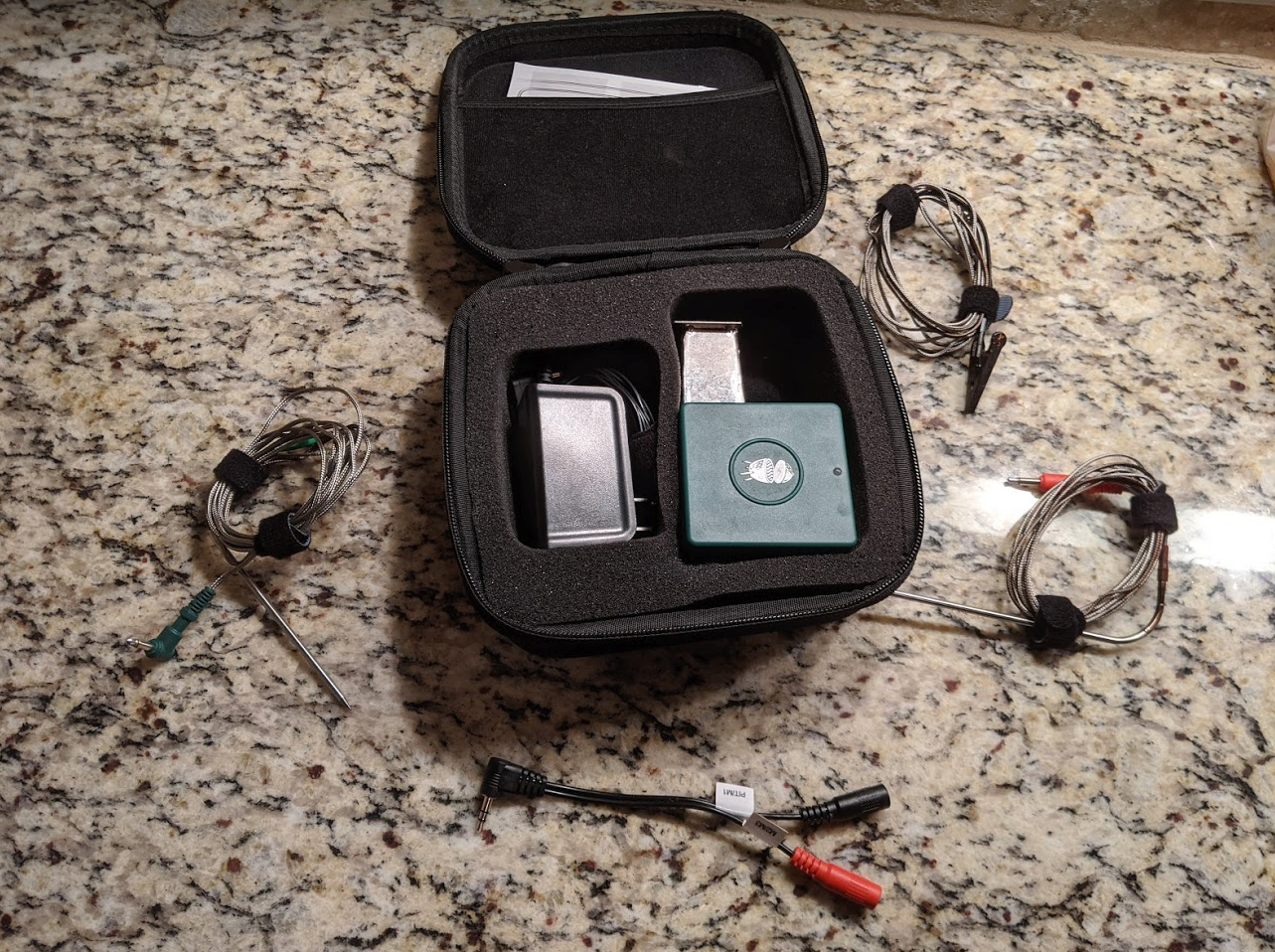 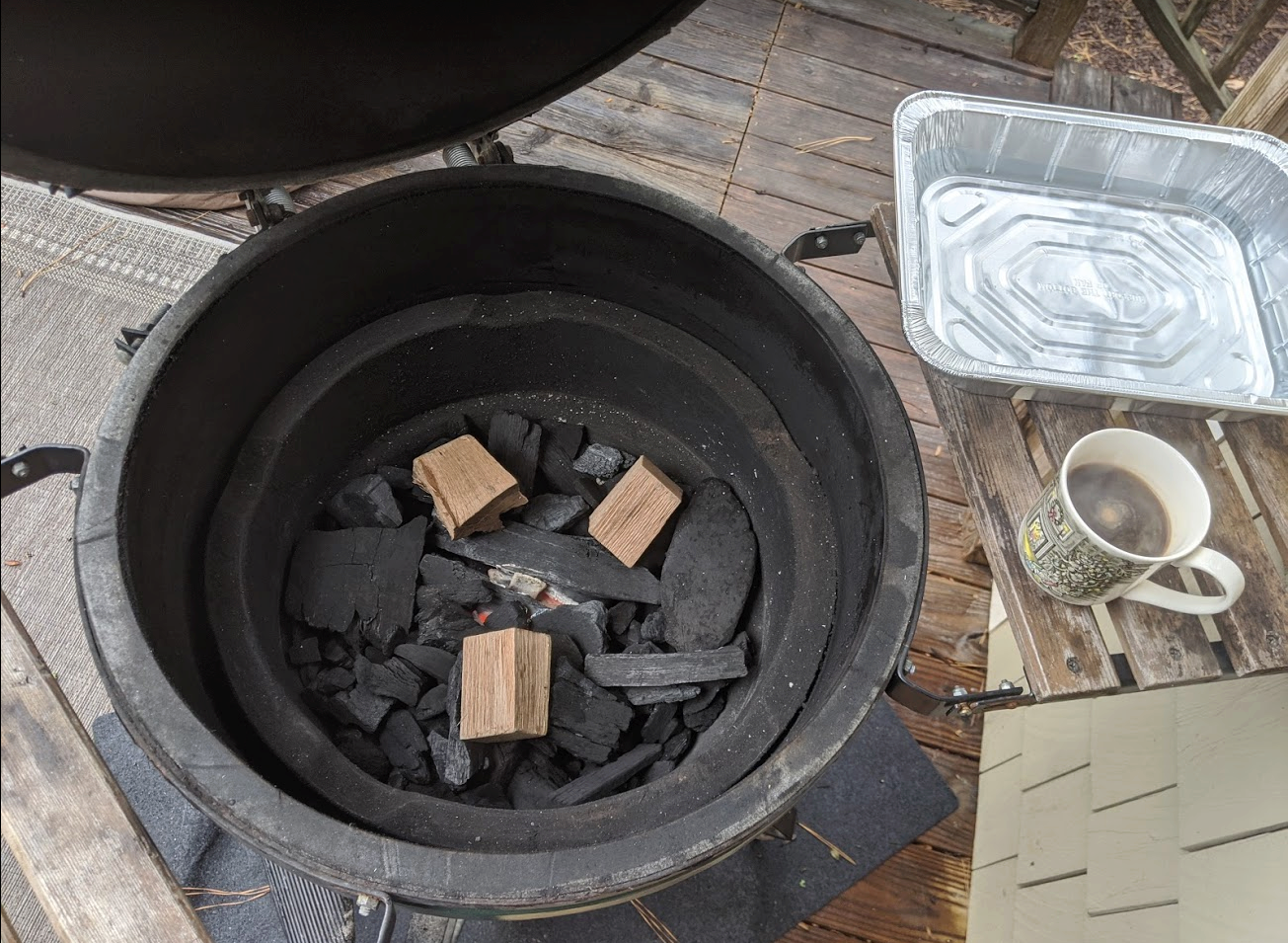 Let the center of the fire get started (7-8 minutes). You don't want a large initial set of coals lit as this will make it harder to ease into (and stablize at) your low target pit temps. It may also lead to your coals burning out sooner for long cooks (not sure about this point, though).

I recommend easing into your desired pitt temp. I will be using a "blower" to regulate the temperature, but I won't put that on until well after the meat is on and the temp is stable.

Once the temp is reading 230-250℉ on the dome temp and this seems stable, we can proceed with putting the meat on.

(I still haven't put the blower on the bottom vent yet)

I insert one or two (2 if you're curious, but you will need a Y-cable) food propes into the meat.

Once you have the meat on, propes in place, temp stablized without aid; now we can open up the controller app on your phone. It will most likely be set to the target temps of your prior cook. Thus, the blower may already be going crazy (and you don't want this messing with your initial coals).

If you get your initial coals right, you will have such an easier time maintining your temp without wildly oscilating.

Also, the controllers may recognize when you open the lid (and the pitt temp plummets) so it may not turn the blower on immeidately; but, I've found that it turns on sooner than I'd like.

Since the meat is on, I'm not going to open this again until it's time to warp. So we can proceed with the blower/controller.

Once I have my pitt temp slightly above target and I think it is going to start trending down slowly (determined by how open the vents are), I make sure the controller set temp is what I want (which should be lower than the current temp; so the fan should not be on). 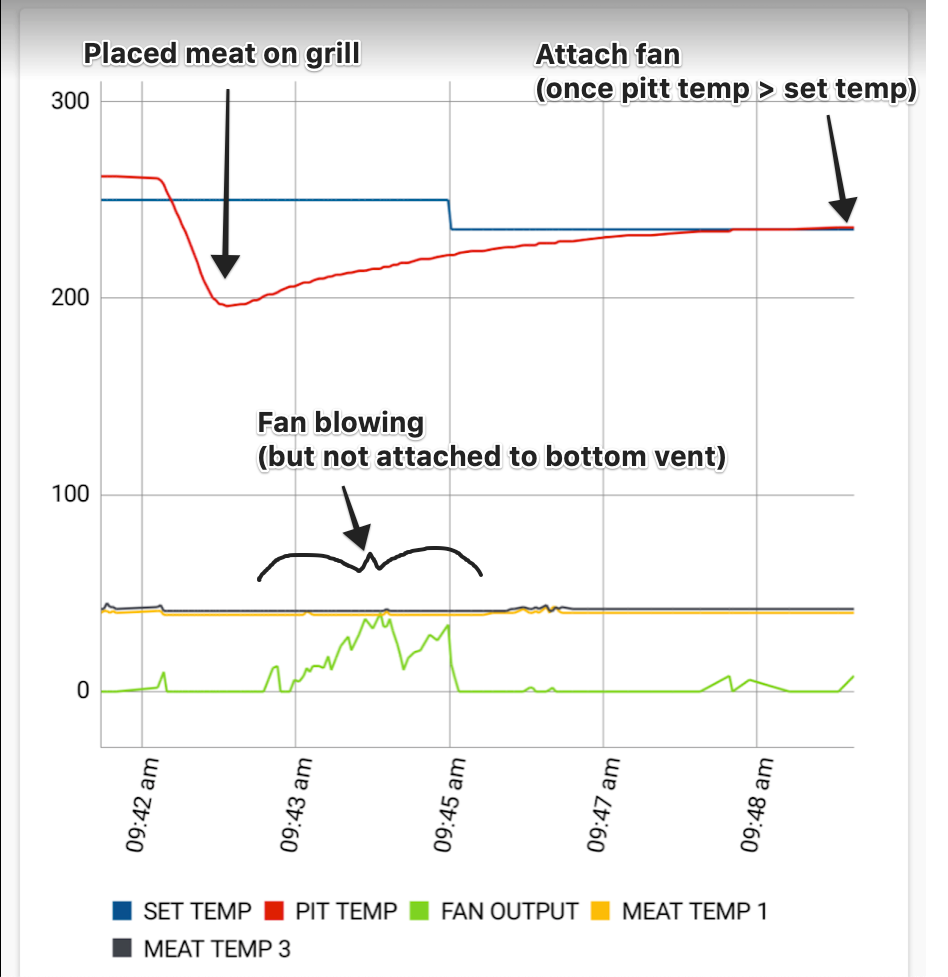 Now we can attach the blower. Ideally, this won't turn on immediately, and when it does it should be at a low percent of the overall output capacity. 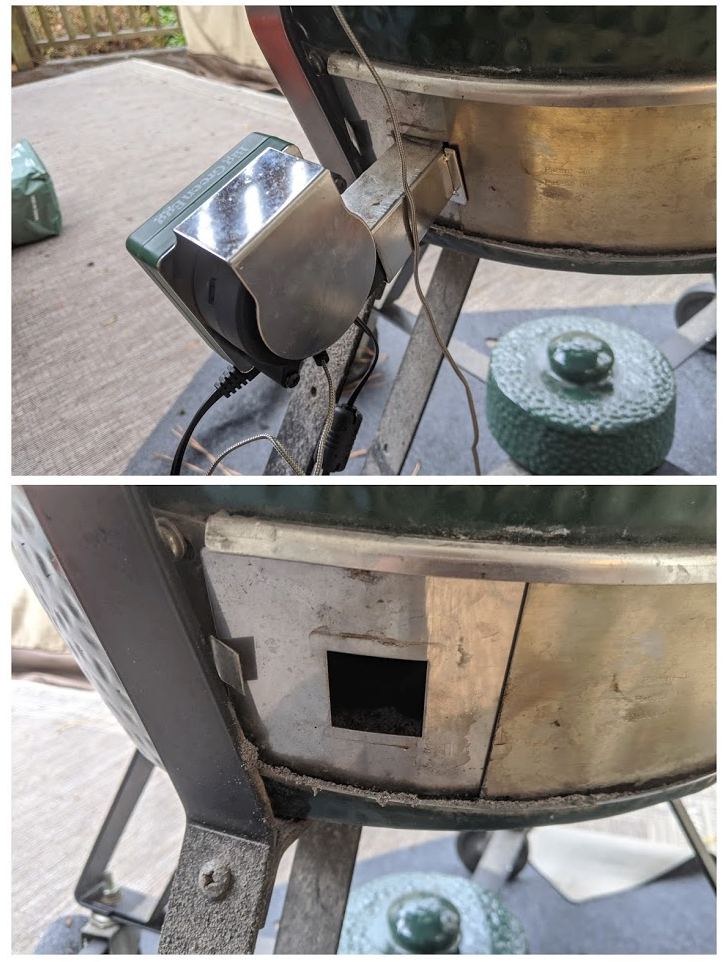 It may take practice (and/or trial-and-error), but you will get the hang of how to manipulate your vents to produce the desired, stable temp

Once the meat is 155℉-160℉ (in the stall), it is time to wrap. You don't want it to loose too much juice and wrapping will help it power through the stall (not take as long). I find that wrapping towards the middle of the stall is better than waiting until the end or out of the stall in terms of overall final product).

Make sure you have double, tripple foil on bottom as this we don't want to lose juice (a LOT will acumulate the rest of the cook, and we'll want this to be reabsorbed during the "rest")

At this point, wrap in a towel (delicious fat juice will get on your towel, so don't use a nice one..) and throw in cooler of sorts to rest for 1-3hrs.

After the porks rests for a long time (and hopefully absorbs the juice), it's time to "pull" it.

*I've tried the bear claw things and they are cool especially if you want someone else to have fun with it, but not really practical